Harper’s Crime and Punishment Agenda: The Top Most Offensive (and Destructive) Laws

It feels like a week does not go by without the Harper government’s introduction of a new law or initiative purportedly aimed at making our “streets and communities safe.”  Rather than make us safer, however, these crime and punishment laws are leading us toward disaster.

Criticism by the public and experts to these moralistically-named bills has been loud, clear, and supported by evidence.  With a majority in Parliament, however, the Conservatives see little value in listening to the sage advice and admonishments of Canadians.

A complete list of all the bills and changes would go well into the hundreds.  Instead, here is a quick reference of some of the most significant and damaging laws enacted by the Harper government:

1.        The  “Tackling Violent Crimes Act” sounds like a story title from a Marvel comic strip, but it’s the Haper government’s one-size fits all answer to crime: “Jail everybody.  Jail them longer.”

The more prisons “solution,” is combined with the government’s utter failure to do anything constructive to address the causes of crime, or to address the fact that overcrowding in prisons and that incarceration result in much violence and increased recidivism.[i]

A portion of this legislation quickly became the subject of a Charter application in R. v. Smickle.   In that case, Leroy Smickle, a young man with no criminal record, was alone one evening at his cousin’s home (he had not joined his cousin to go out as he had work the next day), in his boxers and undershirt, while holding the gun he found at the residence.  He was foolishly posing with the gun for a Facebook picture in front of a computer that was on his lap, when the cops burst in, with the intention of arresting the cousin.   For his foray into showing off a gun to no live persons, he faced a minimum jail sentence of 3 years, if convicted.

The trial court struck down the portion of the law that left an accused person open to this kind of harsh sentence for a first offence for an act that posed a danger to no one (but the accused).

The Crown has appealed the case.  The appeal is being heard as I write this article.  So the fate of the accused and the law are yet undetermined and uncertain.

What is certain to all who are familiar with the evidence, however, is this: jail sentences and higher jail sentences not only do not reduce crime and recidivism, but in some cases they actually increase the likelihood of recidivism.

Prior to the enactment of this law, sentencing judges in some jurisdictions counted an offender’s pre-trial custody time as more than 1:1.  There were good reasons for this.

Conditions in pretrial detention centres are notoriously worse than those where inmates serve their sentences: overcrowding, sleeping on floors within inches of dysfunctional toilet bowls, an absence of educational or counselling programs, lengthy lock-downs which keep inmates in cells for 20-24 hours a day, unsanitary conditions that expose prisoners to disease, the legal and moral problems with incarcerating people when they have not even been found guilty, and the psychological ramification of awaiting a trial while in custody.  Judges, who observed the recurrence of these harsh conditions concluded that it was necessary to count pre-trial detention as more than 1:1.

But the Conservatives contended that when courts granted someone 2 for 1 credit for pre-trial custody, they were misleading the public as to the actual sentence.  They felt that they had to step in to make judges and the criminal justice system more “honest.” So the law essentially prohibits judges from counting pre-trial custody as more than 1:1 when sentencing an offender.

In passing this legislation, however, the Conservatives not only removed judicial discretion in sentencing –an act which they have repeated many times since 2010—but they also hid from the public the truth about jails, jail conditions, and the factors that judges consider when they determine the appropriate sentence for someone.

The result is greater overcrowding in our jails, unjust discrepancies in sentencing, and even less accountability for the shameful conditions in some of our jails.

The law results in greater unfairness since, because of our parole laws, persons who have spent time in pre-trial custody (often because they don’t have the resources or the community support to get bail), will end up serving a longer jail term for the same offence, when compared to those who received the exact same sentence, but had been out on bail before their trial.  Most Canadians would deem this discrepancy unfair.  But this is, in fact, the result of the Truth in Sentencing Act.

Then things got worse.

Soon after they gained their majority in the legislature, the Harper government rolled all their various crime bills into one giant Omnibus bill, called the “Safe Streets and Communities Act,” or Bill C-10.  The many offensive portions of this bill came into force at different times during the last year.

The next  5 items are the poisonous branches of the Omnibus tree.

3. Increased sentences and mandatory minimum sentences for a range of drug offences:

The most criticized portion of this bill is that which subjects a person who grows 5 or more cannabis plants to a maximum jail sentence of 6 months or 5 years, depending on a number of legal factors. 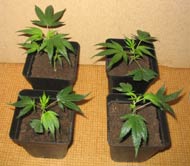 One more pot and you could go to jail for at least a year (from http://www.cannabizz.com)

The evidence that the war on drugs is destructive and a failure is abundant.  Many people who were once advocates of the war on drugs warn that we must change how we deal with the presence of drugs in our society, and have spoken out against these futile and destructive measures.  (See the Sundance Film Festival Grand Jury Winner documentary film, The House I Live In by Eugene Jarecki. http://www.youtube.com/watch?v=a0atL1HSwi8 )

Until recently, conditional sentences had the support of both Liberals and Conservatives.  They were seen as a cheaper, more effective method of rehabilitation and reintegration of offenders, as a means of ensuring that otherwise safe people could remain employed, remain with their families, and obtain the support that they needed, while being held accountable for their offences.

Conditional sentences recognize a few research-based realities: jails are generally ineffective tools for reducing recidivism; in some cases, jails increase the chances of recidivism; they are costly and unaffordable in society; they are oppressive; and there are better means of advancing societal goals of crime reduction than incarceration.

Judges, who were most familiar with the offender and the circumstances of the offence, could determine whether or not a conditional sentence was suitable for a particular individual.

But Bill C-10 eliminated this sensible option for many offences, including ones such as car theft or the theft of expensive items by first-time offenders.

5.  No Christian forgiveness from a party with strong ties to religion:

Before March of 2012, a person who had been convicted of a crime, but had spent a designated number of years afterward as a law-abiding citizen, could apply for a “pardon.”  If granted, his record would be cleared, his job prospects improved, his contribution to society could be increased.

Now, however, an eligible person can apply, not for a pardon, but for a “record suspension.”  This is more than a mere matter of semantics.  The label tells it all: if you have once been convicted, no matter how long ago the offence was committed, not matter how you have behaved since then, you will never be able to start over clean.

Bill C-10 has also expanded the range of conduct that could get an inmate into trouble.  One new offence: being “disrespectful toward a person in a manner that is likely to provoke them to be violent.”  You know, like swearing at someone.   Disciplinary offences can lead to a range of consequences, including segregation.

7.   Punish our children more as well:

The crime and punishment ideology extends into the Harper government’s dealings with those who especially need our protection and guidance, young people.  The law places a greater focus on punishment and incarceration in the sentencing of young offenders.

Prior to the enactment of Bill C-10, the focus of sentencing judges in youth court matters was rehabilitation and reintegration of young offenders.  Judges must now, however, focus on denunciation and deterrence.  The principles of denunciation and deterrence generally call for incarceration.  This is a significant departure from Canadian values and government focus over the past few decades, and runs counter to all our knowledge and experience when it comes to how to best deal with young persons who come into conflict with the law.

The primary principles underlying our old Y.C.J.A. were to prevent crime by addressing the circumstances underlying a young person’s offences, to rehabilitate and reintegrate them, and to subject the young persons to “meaningful consequences,” all with a view to promote the long-term protection of the public.

With Bill C-10 passed and its various portions now being law, the Harper government moved on to other crime legislatin.

A person who suffered from a major mental disorder at the time of the commission of their crime, in some cases, may be found to be “not criminally responsible.”  Such persons are indefinitely institutionalized, until such time as a panel of experts (a Review Board) determines that these persons no longer pose a significant risk to society and that they have control over their illness.

The Harper government, however, is pushing for longer institutionalization and decreased focus on rehabilitation and reintegration.  Review Boards considering whether or not an NCR person should be released are now to make public safety the “paramount concern.”  Furthermore, they are no longer to impose the least onerous and restrictive conditions during a disposition hearing, but are to impose what is “necessary” and “appropriate.”  The words alone are not harmful, but the message is clear: review boards should shift toward continued institutionalization and should shy away from a measured release of individuals.

A bigger prison population. Longer terms of incarceration.  Little to no investment in the kinds of social services and education that can help to reduce crime.  No support for alternatives to the criminal justice system, such as restorative justice.  Others have traveled this road.  And they warn us about the disaster toward which we are quickly heading.

But no matter, the tough talk is still getting votes.  So why let evidence and experience get in the way of ideology?

[i] “Do Sentences of Imprisonment Reduce Reoffending Rates for Either Men or Women?” Criminological Highlights, Volume 13, Number 2 (February 2013) Centre for Criminology and Social Studies, University of Toronto.